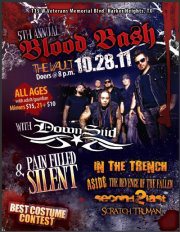 Just add a risky song for us called PART OF ME to our profile. This by far is most different song you will hear from DOWNSIID, we hope you like it. The Life of Lies CD is now available on ITUNES produced by the Legendary ROY Z (HALFORD, TRIBE OF GYPSIES, IRON MAIDEN) Enjoy.

Hellos IAC! Just wanted to take time to give a quick update on the band. We recently added our new song "Placebo" to the ROCK charts and happy to see it's doing pretty well. The song was written by Jason "String" Atwood. The message in the Music is all about what we do as people to mask reality. Some use pills, some use alcohol or whatever their vice might be to escape that empty feeling. We worked hard on the song and would love your feedback. Next week we are headed into the studio to work with Roy Z. This is a dream come true. To be able to work with a musician and producer at the top of the pile is an awesome feeling. Looking forward to task!. Last week we added a song called "Poledancer" to the Hip-Hop charts, check it out. So far not a lot of plays but it gets great response in the live show venues.
More great news to come about our up coming album "THE STAND" Your not going to beleive who's helping produce along with ROY Z. Peace to the Indie.

Downsiid will be playing the EGYPT Reunion Tour!!!!

Downsiid will be kicking off the Backyard Band Indie Music Show this Thursday at THE MUSIC VAULT in Harker Heights, Texas. The Eagle 101.7 will be doing a live remote from the show.

Hello IAC! DOWNSIID will be making their first East Coast trip this coming week. We will be doing two shows in Virgina with our good friends EGYPT who are doing a reunion show on 12-18 AND 12-19. JAXX'S on the 18th in Springfield VA and The Jefferson Theater on Dec 19th. We would love to meet new friends in this area. We always have a good time so come on out and have some fun with DOWNSIID.

12-23-09
Terrible News, our show at The Jefferson Theater on last Saturday was cancelled due to a snow storm. We drove all the way from Texas to be caught in one of worst snow storms in Virgina History. Just our luck. We did, however, make the JAXX show on the 19th that was a blast! Thanks to all of our new east coast peeps. Your hospitality was greatly appreciated.
Signing off for now. Have a Happy Holiday all! DOWNSIID
1-5-09
We are overjoyed to see that our song Placebo has moved up the ROCK charts to # 14. Thanks to all the folks who dig the tune. All the best in the new year. DOWNSIID
1-13-09
Downsiid is gearing up for the 4th annual SIID SHOW!! This show is the best underground Music Festival in Texas. Going on the fourth year the fest has now added on new cities such as Lubbock,TX, San Antonio, Tx and Bryan College Station. Check out details at www.myspace.com/DOWNSIID. Check out the site for the official lineup.
1-16-09
Placebo keeps moving upward!! Go Placebo. Thank you listeners for appreciating the song. This is why we do what we do. Kick ass!
The band is gearing up for the fourth Annual SIID SHOW that will be kicking off at the Music Vault in Harker Heights TEXAS. Tickets are $12 presale and $15 at the door. This is the biggest underground Rock/Hip Hop Music Fest in Texas.
2-2-2K10
The SIID SHOW Rock N Roll Circus started off with a huge bang at the Music Vault. The show was a sell out with great texas bands on stage. Huge thanks to all of the bands who participated in the event to make it a great time for the freinds who made the show. Next stops will be WACO TEXAS and Austin!!!!!

2-19-2011 - Back in WACO for the 5th Annual Siid Show. Check our website for details on the Texas Bands who will rock WACO. www.downsiid.com