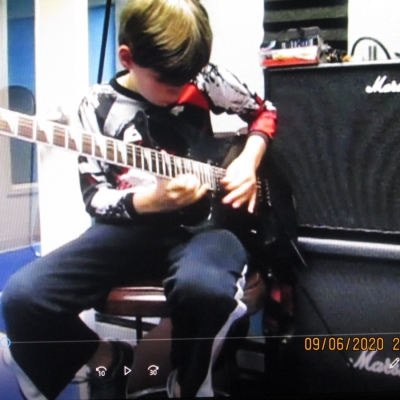 StarcinaMusicGroup proudly announces the on-line debut of an exceptionally talented young Artist!
Luke Robert was brought to our attention in October 2019 at age 11.
Luke is an energized multi-instrumentalist, songwriter, singer who's 'home base' is our Pro-Studio. He is an up & coming and rather exceptional Producer/Engineer who is in our 'Artist Development' program
and being mentored by the entire Studio Staff. Luke has a sincere love of 'Classic' rock music, mainly from the 60's & 70's as well as previous and post decades to this era! His first 3-song 'EP' is hereby offered with new songs to be added at least twice a month! The vastly experienced Studio Staff back Luke up musically. But the ensuing awesome 'sound' would not be possible if Luke were not so talented! We only back him. He writes, arranges, sings and plays mainly guitar and is steadily involved in learning all things Production/Engineering! Enjoy!!